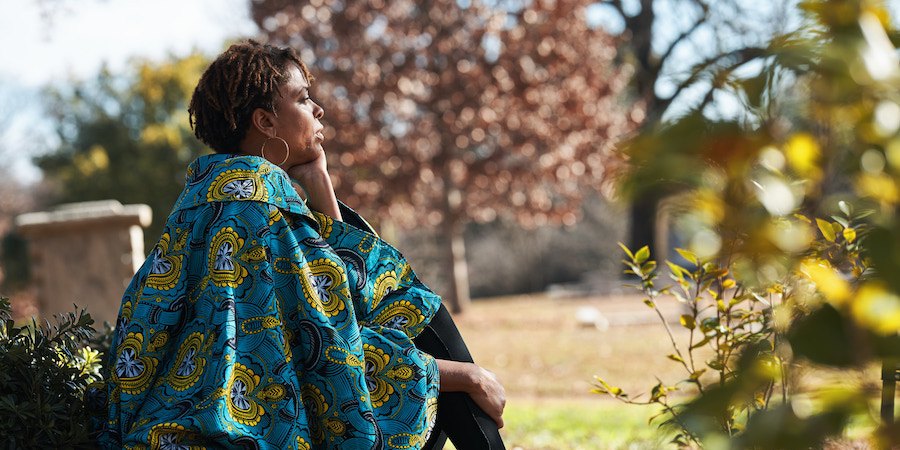 Through this project, Minniefield celebrates the Ring Shout, a traditional African American worship and gathering practice, whose origins in West African ritual and ceremony predate slavery. Minniefield explores evidence of its survival in contemporary dance, music, and spoken word as a testament to the resilience of a people.

Visitors to Oakland’s African American Burial Grounds can examine a replica of a Praise House, a small wooden structure used for worship. The Praise House will include a multimedia installation of the Ring Shout with video projections on the interior of the building and a sound installation emanating from the structure over the newly restored section of the Cemetery.

A limited number of people will be admitted into the Praise House at a time, and masks will be required for entry. We encourage you to reserve a time for viewing online, since reservations will be prioritized over walkups.

Historic Oakland Foundation will be offering free tours of Oakland’s African American Burial Grounds during the run of the project. Check back soon for details.

The work of artist-activist Charmaine Minniefield preserves Black narratives as a radical act of social justice. Firmly rooted in womanist social theory and ancestral veneration, her work draws from indigenous traditions as seen throughout Africa and the Diaspora, to explore African and African-American history, memory and ritual as an intentional push back against erasure. Her creative practice is community-based as her research and resulting bodies of work often draw from physical archives as she excavates the stories of African-American women-led resistance, spirituality and power.

Minniefield’s recent public works, which include projection mapping and site-specific installation, insight dialogue around race, class and power. Through interdisciplinary collaboration, she incorporates other art forms to virtually bridge the past to the present. Minniefield recently returned to Atlanta after her unexpected and self-initiated artist residency in The Gambia, where due to COVID she was forced to remain for over eight months. She used this time to explore the origins of her cultural identity and the Ring Shout.

Minniefield’s work is featured in a number of public and private collections, and as a muralist, her walls can be seen throughout the City of Atlanta and beyond. She was honored by Mercedes Benz as a part of their Greatness Lives Here campaign. She and her recent mural in Brooklyn, depicting women who shaped the future, is featured in the 2020 US Census commercial. Minniefield recently served as the Stuart A. Rose Library artist-in-residence at Emory through a collaboration with Flux Projects.