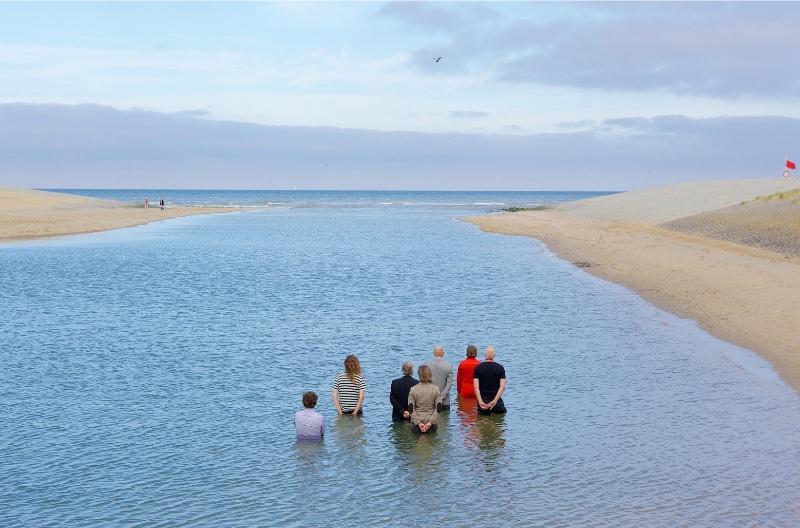 36.5 / A Durational Performance with the Sea

36.5 / A Durational Performance with the Sea (2013 – present) is a series of nine site-specific performances and video art works that take place in bodies of water around the world. Artist Sarah Cameron Sunde stands in a tidal area for a full cycle (usually 12-13 hours) as water engulfs her body and then reveals it again.  The public is invited to participate by joining Sarah in the water and by marking the passing hours from the shore; the local community is involved in all aspects of creating the work.

The performance on September 14 will be the culminating work for the 36.5 series.  A large-scale global event, hundreds of people will stand in the water in NYC while re-enactments happen in all previous locations around the world.  Designed to engage people in conversations around sea-level rise, the project began in Maine 2013 as a response to Hurricane Sandy’s impact on New York City.  The hope is that each individual that encounters 36.5 will consider their contemporary relationship to water, as individuals, in community, and as a civilization.

This livestream event will introduce Sarah as the next artist in our Flux Exchange, an incubator series that invites artists to explore the city of Atlanta as a site for a future large-scale public project.

Peachtree Fountains Plaza is located at Underground  across from the 5 Points MARTA station and bordered by Wall St, Pryor St, Peachtree St, and “Upper Alabama.”  It is under the Peach Drop tower, for those who know the New Year’s Eve tradition.  In addition to MARTA, we recommend biking or rideshare. Street parking and parking lots are located in the immediate vicinity on the surrounding streets.

A New York-based interdisciplinary artist and director, Sarah Cameron Sunde works with performance, video, and public art.  She was recently awarded a Guggenheim Fellowship to complete her ongoing series of works, 36.5/A Durational Performance with the Sea (2013 – present, nine works on six continents).  In 2017, Sunde instigated and co-founded Works on Water, an artist-driven experimental organization dedicated to art that is made on/in/with bodies of water.