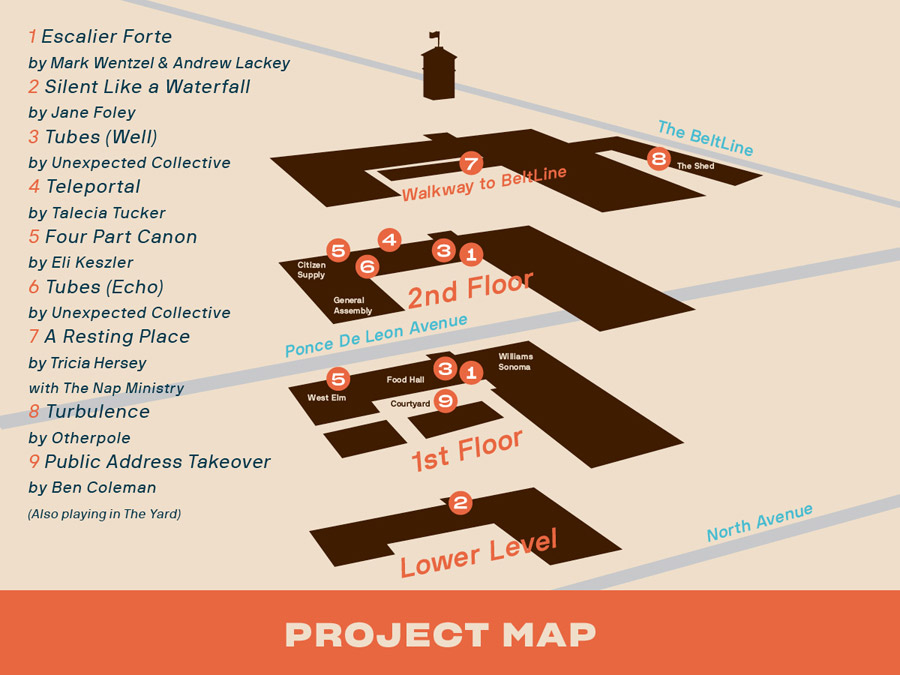 Unexpected Collective is a group of artists who create interactive experiences that evoke joy, delight, and surprise. Tubes is a physicalized audio interaction in multiple locations in Ponce City Market that transmits a human connection across space and time.

Through two physicalized audio installations within Ponce City Market, Tubes explores the wishes /// this could be dreams or secrets instead of wishes/// we hold close and those we shout out into the world.

Confess into Echo Tube and your secret echoes back, mixed with audio fragments from the past.

The Wishing Well Tube receives your heart’s true wish. Toss in the coin and listen; you might receive an answer.

Rebecca M. K. Makus holds a B.A from Smith College and an M.F.A. from the California Institute of the Arts. Her previous installation work includes: The Toolbox at FLUX Grant Park, a durational performance that explored the history of the park; Ipomoea: The Urban Garden Within, an exploration of responsive performance space which was seen at the Creative Loafing Best of Party and as part of 7 Stages’ Curious Queer Encounters; a collaboration with artist Gyun Hur at Get This! Gallery in Atlanta; and a piece commissioned as part of Paper Moon, an exhibit at Kennesaw State University curated by Teresa Bramlette Reeves. Rebecca has been a lighting and visual designer for performance for 20 years. Her work includes custom designed and constructed interactive light objects, transforming alternative performance spaces, embedded media design, and site-responsive work, as well as designing in traditional venues. She was honored to receive a Suzi Bass Award in 2015 for Best Lighting Design of a Play.

Elly Jessop Nattinger is an artist and technologist who believes in the power of integrating new technologies into artistic expression to explore new qualities of experience and tell new stories. She’s built interactive multimedia systems for live performance, wearable musical instruments, and technologically-responsive installations.  Drawing on her background in computer science, choreography, and theatrical design, she completed her doctorate at the MIT Media Lab, where she was a member of the Opera of the Future research group. Major projects she has been involved with include the robotic opera Death and the Powers (presented in Monaco, Boston, Chicago, and Dallas), an online extension of the NYC show Sleep No More, and the Vocal Vibrations installation in Paris and Cambridge. In addition to her independent theatrical work, she is a software engineer and prototyper in Google’s Augmented and Virtual Reality division.

Peter A. Torpey works at the nexus of theater, light, music, technology, and storytelling. As the founder and principal creative at The nth Art, he collaborates with theater-makers, orchestras, museums, festivals, educational institutions, and other artists to create experiences that connect audiences and participants with stories and each other. By incorporating new technologies and techniques as part of his artistic palette, he explores novel modes of representing expression (Death and the Powers; Lilith; Fensadense) and presence in live performance (Remote Theatrical Immersion: Sleep No More; Powers Live; Ipomoea). Recent works include projection design for the world premiere opera productions Schoenberg in Hollywood and If I Were You. Torpey received his doctorate from the MIT Media Lab. Throughout his work, Peter addresses the technological needs of complex performances and exhibitions, as well as the design of visual and experiential languages for each project. His media, lighting, and interactive works have appeared worldwide, including: Virginia Opera, Boston Lyric Opera, Merola Opera Program, Opéra de Monte-Carlo, Chicago Opera Theater, Dallas Opera, 7 Stages Theater Curious Encounters, Flux: Grant Park, Toronto Symphony Orchestra, Lucerne Festival, MIT Media Lab, and CalIT2 IDEAS San Diego, Boston Cecilia, Rockport Music, and The Boston Camerata.